I just finished up release 0.9.14 which has some somewhat minor and kind of boring changes, but I think they're good ones. First off I went through and figured out what sorts of actions only have an audio indicator. The main ones I came up with were when you try to do something but don't have the inventory or currency to do so. For example if you try to plant a bomb but don't have any bombs in your inventory, or attempt to execute a special attack without enough souls. My solution was to shake the relevant HUD element, which I'm hopeful conveys that the game knows you pressed a button but it's showing you why it can't do what you wanted. I don't actually know if this was a problem for anyone, but at the very least it should be more accessible to anyone who is hearing impaired or if you just want to play the game with sound off. You can view a short video of this change in this tweet I made of it earlier today.

The second addition to the HUD is a visual indicator of when you're doing something that takes multiple turns. The two examples of this are both special attacks: the double action for Ghost and invulnerability for Titan. Previously there was no real information conveyed about how many turns you had left. Again, I don't think it was a huge issue, but every little bit of feedback helps. I'm not entirely sure if this will be the final design but you can see what it looks like right here: 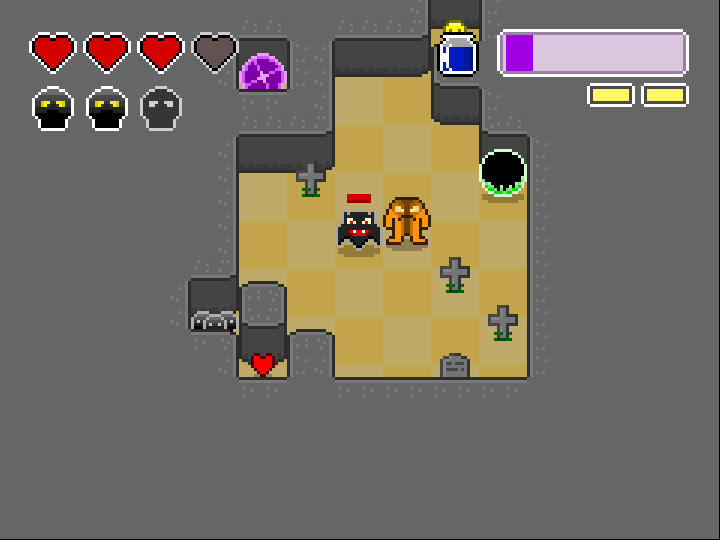 Finally I made a few gameplay adjustments. Titan gets his special attack for one turn longer than he did before (three turns instead of two), and Soul Siphons no longer try to sell you items that increase your maximum health or bombs if they're already at the max. Those are somewhat minor changes but they make everything feel a little better. Hopefully testers enjoy them!