The first post-launch patch! This is a fairly minor release with some housekeeping and typos (sorry, Devon!) but contains a few good things.

New gameplay options menu. In the menus if you go to Help & Options > Game Setup & Info there's a new menu called "Gameplay Options" which contains the game mutators (which have to be unlocked) as well as two new options. The first is HUD Type which will allow you to select from the original HUD and a new compact HUD. Here are some fairly small screenshots of what they look like side-by-side. 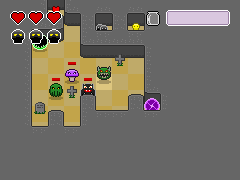 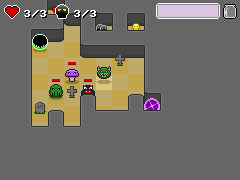 The other option in Gameplay Options is the ability to show or hide enemy health bars. For the majority of development enemies had no health bars but during testing it was often suggested to me so I implemented it. However if you want to give yourself an extra challenge you can turn them off.

If you bought the game on itch.io but play via Steam then there's also an additional change on the Steam side, which is Steam Achievements. There are eight (seven regular, one hidden) for you to unlock. You can see them over on Steam. And remember, if you purchase the game on itch.io you also get a Steam key, which is the best of both worlds!