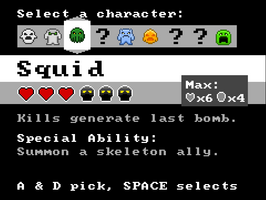 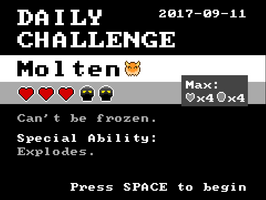 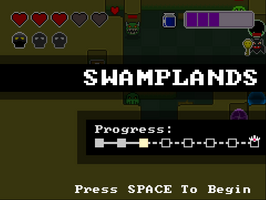 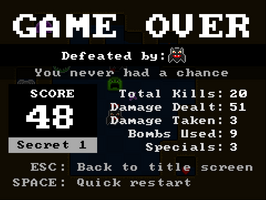 A lot of the work on this update went into the UI. This continues to be in the name of finding ways to give better feedback to the player.

Feedback from letting 2 of my kids play though (Caleb, 13 & Devon, 10).  There is a video/commentary from Caleb's second-ish playthough (I'll email you a link to it.)  Some notes from watching both of them play:

Andrew (16) was watching his brothers play and said "That looks like a really good game for being in Beta."  Put that on your box cover :D

They both like the game through and are likely claiming 2 of your remaining downloads (I told them they could keep playing as long as they didn't hijack my computer.)

Yesss this is so awesome! A lot of that is great exploratory stuff that I wanted to be part of the experience of learning it. Like being able to blow up a bunch of the level if you want (there aren't any secrets that you can't see when the level loads). It might be good to revisit attacks/attacking in the tutorial too though, but it also might just be something you learn on your first playthrough or two. The idea is you play it, get owned, but you always know what went wrong or at least have some idea. I think I still need to refine that a here and there, so this is super helpful feedback. They're of course welcome to beta keys! Also tell them they'll be in the credits, too ;)

Also got your email with the video and will watch that this weekend. Ugh also the bug you found is one that happened to me recently too. When you attack the bat  he doesn't have the ability to just not move backwards if his way is blocked, so he'll just default to backing over the enemy who is blocking. Should be easy to fix but definitely not optimal.

Thanks for all your help and thank Caleb and Devon for their help as well!